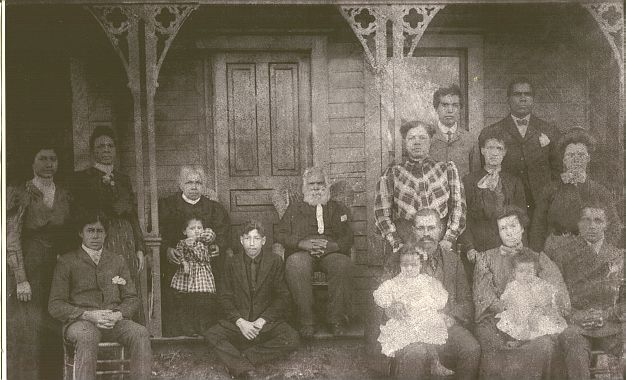 John Nelson was born a slave in 1830 in Louisville, Kentucky. He escaped from his slave master, George Lynn in 1854. After running away, he changed his name to Alexander Carter and fled to Marrow, Ontario, Canada. He remained in Canada until 1860. While in Canada he met and married Harriet Mulder born in 1842. They were married at Ann Arbor, Michigan on May 25, 1860. In March 1865, John enlisted in the United States Army. He was inducted at Lockport, New York, and was sent to Massachusetts. For medical reasons, he was discharged at Wilmington, North Carolina in April 1865.

John and his family moved to Ypsilanti, Michigan, where they lived until 1880. They then moved to Leslie, Michigan, where they lived until 1884. In 1884 they moved to the McBride-Stanton area. In 1885 they homesteaded the property of which a part is still in the Nelson family. After John's death in 1906, Harriet received a pension of $8 per month from the United States Army. She received this pension until her death in 1923. John and Harriet Nelson died and are buried in the McBride Cemetery, McBride, Michigan. Their children are Eliza, Sarah, Annie, John, James, Robert, Forrest, Morris, and Winifred.