Almost all the factual information presented here derives from the remarkably interesting website of The Old Settlers Reunion and their page on the Scott Family. The 1880 United States Census was also consulted, as well as this short discussion of black vaudeville acts.

I was searching one day for personal accounts of Michigan settlement when I found the fascinating website by the Old Settlers Reunion group from Mecosta, Isabella, and Montcalm counties in Michigan. I am quite glad that I did. As I browsed the website that focuses on black settlers in these counties in the 1860s and on -- some of whom came by way of the Underground Railroad -- my eye fell upon two pictures that I have had on my mind ever since. The pictures can be viewed at the bottom of this post, courtesy and with permission of the Old Settlers Reunion website.

Born October 14, 1868, in Mecosta County, Jim Scott would marry a woman named Mary. Jim and Mary created the string band and tent show seen below. On the 1880 census, Jim and his parents were listed as "Mulatto." Just recently in my work with U.S. census material in relation to fiddle player research, I came across a statement acknowledging that the term "mulatto" is a loaded and ambiguous term but nevertheless one employed by the census in 1880. This is what the Old Settlers Reunion site has to say about Jim's parents: "Robert Scott was born in Missouri on August 1, 1844. He met and married Martha Guy on October 1, 1865. Martha was the daughter of James and Ann Guy and was born on May 27, 1851." The 1880 census gives her birthplace as Ohio, which makes sense according to the Old Settlers Reunion site and the history of the settlement of Mecosta county.

Given James' (Jim's) birth date of 1868, I estimate that these pictures derive from 1895-1910, putting Jim, who is presumably one of the men with fiddles, between the ages of 27 and 42. Though institutional racism raged openly in the United States at the time -- even in the theaters where Vaudeville shows performed -- black performers were far from abnormal. Further, the Old Settlers Reunion site gives the following: "Jim Scott and his wife Mary had a vaudeville (tent) show and traveled all over the U.S." It is unclear whether the show then had an outdoor or tented basis or whether it performed in theaters. To my mind, a "tent show" brings the image of the traveling medicine tent show -- and the pictures could easily represent that kind of performance with no fear of anachronism-but the medicine-show hypothesis may well be wrong.

The Old Settlers Reunion site reveals that Mecosta, Isabella, and Montcalm counties achieved early educational developments in racial integration, and the picture of the string band below offers another example of the ethnically diverse history of Michigan fiddling and folk music. For me, the photograph of the band is teasing and leaves me with many questions. What did their repertoire consist of? Did the fiddlers play in a southern or Southern-influenced style? Did the mandolins play melodically or rhythmically or both? In what style or styles did the guitar player perform? What was the approach to the double fiddle -- unison, harmony, or, far less likely, the "second fiddle" or "bucking style" described by northern Métis fiddlers -- or did they not play together and instead switch off? The many questions will possibly never be answered and my initial investigation has led to next to nothing about the Scott family musicians that the Old Settlers Reunion site didn't provide. What a treat it would have been to have heard this group of musicians play. 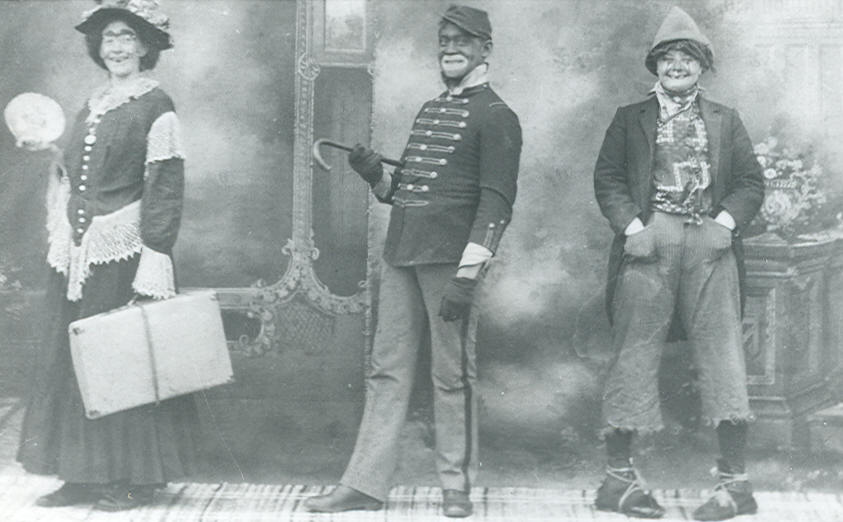 Jim Scott and his wife Mary had a Vaudeville - (tent) show and traveled all over the U. S.

A few further comments and hypotheses could be made about the photographs. First, comedy played a significant part in their show, judging from the second photograph. This commentary as often was the case in vaudeville and its predecessor, the minstrel show, likely had racial and cultural foundations. Judging from the picture, I suspect the three characters represented maybe a carpet bagger (though perhaps more likely just a comical housewife on a trip), a civil war soldier, and a country or southern "rube," "hillbilly," or what might now be termed a "red neck." These characters are certainly fairly stock in the consciousness of the United States. It would be relatively in this same time period that Col. John A. Pattee would form his Civil War-based vaudeville show "The Old Soldier Fiddlers." 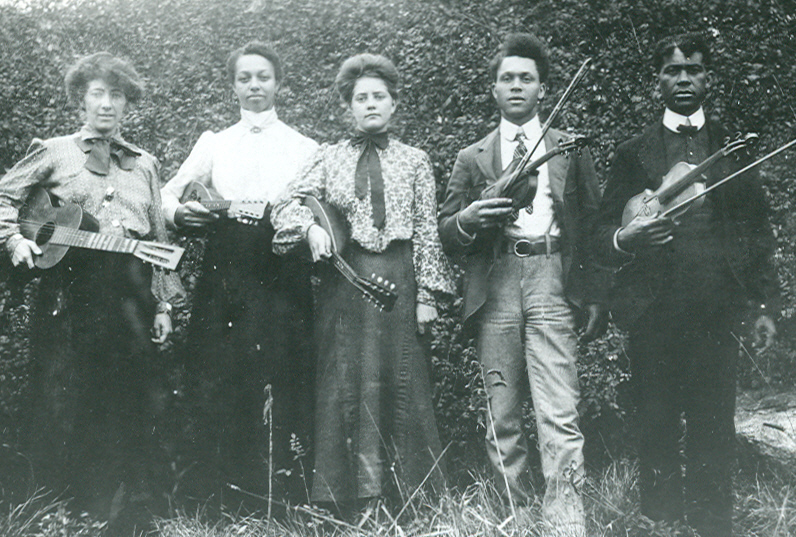 Jim Scott and his wife Mary had a Vaudeville - (tent) show and traveled all over the U. S.

A second comment: this show and band are inter-gender. In fact, in both pictures, women outnumber men. Despite this gender-mix, both fiddlers are male. It is not too unusual to come across mention of women fiddlers in my research, but they are by far the minority of instances I encounter prior to recent years. No doubt there is some sociological reason for this. Certainly, gender has historically influenced instrument choices, with certain instruments being considered more or less appropriate for women and possibly for men as well. In the second picture, though women outnumber men two-to-one (literally) the man is central and holds a cane. While it may not have had the same connotation at the time, the cane may indicate leadership in the group. So, while the pictures may depict a level of freedom for women participants in the band and show, it may also show the operation of public gender roles normative during the period.

Another comment: this band likely had a role in playing for dances in the Mecosta County area and perhaps beyond. In the top picture, the band is obviously not in costume for the vaudeville/tent performance shown below, though it seems apparent that some of the individuals are the same. The top picture could be viewed as a publicity shot, as could the second, but the top picture is not one emphasizing the comedy, color, or flair of the vaudeville show. Instead, the emphasis seems to be the music and identification as a string band. So, it is possible that the Scott family vaudeville show and the string band pictured could have operated as two distinct entities. And one of the primary roles of a string band -- especially in a rural area -- is to provide the music for dances.

One last comment about the photographs is that an element is noticeably missing in the picture of the string band that would become increasingly common in the decades to come. The band members are dressed in what is likely their best suites of clothes. The men wear suits, the women wear nice dresses each with some kind of ornament at their throats. All have their hair well-ordered, and they hold their instruments in uniform one-armed fashion, each, so far as can be observed, with the other arm at their side. This is a dignified, proper representation of a string band. This way of representing fiddlers and string bands is common in this era, but in the 1920s, 1930s, and onward, the "rube," "hillbilly" or "cowboy" images would influence more and more the way that string bands represented themselves -- even in the north, as can be seen in the work of Simon J. Bronner on fiddlers from Upstate New York.