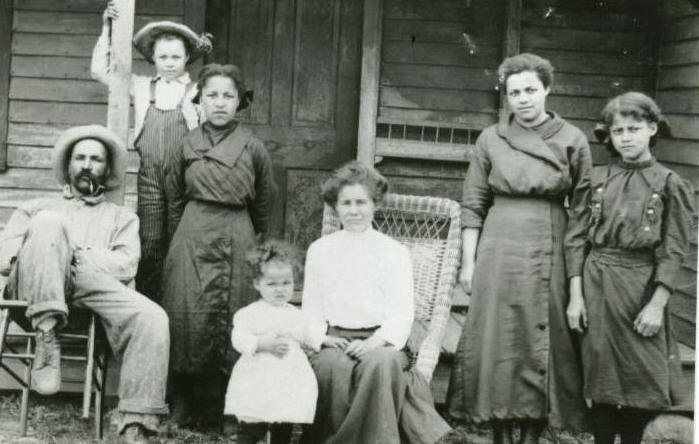 John Welcome Guy, the fourth child of William Guy and Elizabeth Segee-Guy was born in Bushnell Township, Montcalm County, Michigan in 1869. John and his two surviving siblings became the first Michiganians in the William Guy Family. Their parents, William and Elizabeth had settled on farmland in Bushnell in 1862. Their family became the community's first Black residents in a poor white farming area near Vickeryville.

In 1872 the family moved to Rolland Township, Isabella County. John and his two sisters, Theodosia and Margaret attended Oberlin School, a log schoolhouse, built-in 1867 two miles from their home. Later, a wood frame school was built during the 1870s. They walked to and from school every day. Their father etched notches in the trees along the path so they would not get lost. John and Theodosia completed the Oberlin School. Margaret died at age 15.

John Welcome married Alice Dell Myers (1873-1949), daughter of John Myers of Remus, Michigan. Their surviving children were: Clyde, Gladys, Wealthy, Jessie, Lloyd, and Wenda. John was an excellent horseman. He used his team of horses to haul logs to the nearby sawmill for $.50 a day. Alice was a homemaker and also a midwife in the Rolland area. They raised their family on the William Guy farm, which had been equally bequeathed to Theodosia and John. Theodosia married John W. Cross of Remus, MI.

After the children were grown, the farm was sold. John and Alice moved to Lansing for a few years but later returned to the Rolland area. John died in Battle Creek in 1936. Alice died in Detroit in 1949. Both are buried in Pine River Cemetery, Blanchard, Isabella County, Michigan.