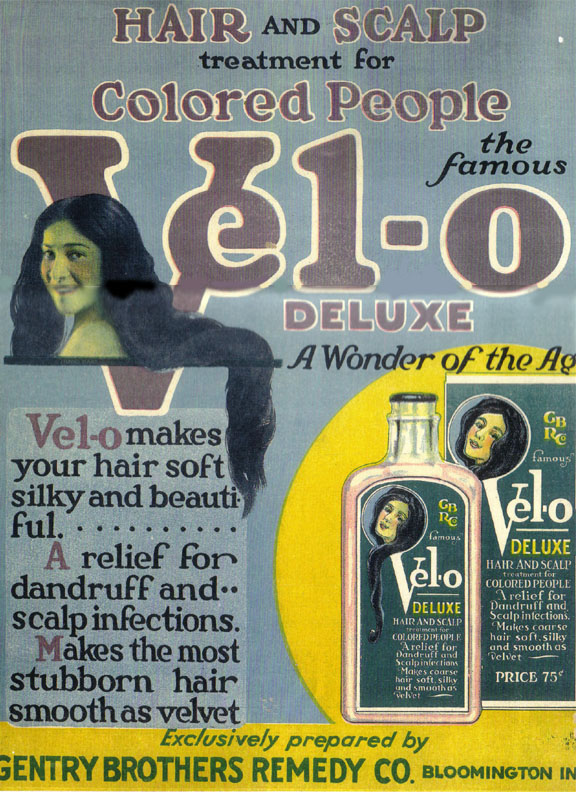 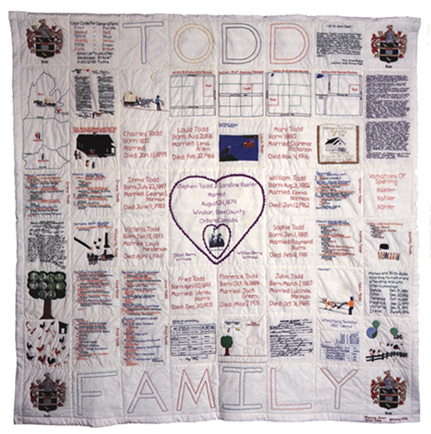 In embroidered and painted pictures and text, the Todd Family Quilt chronicles the experiences of the Todd family members in their journey to and settlement in a mid-Michigan farming community. Each block portrays carefully researched information about the Todd family, including lists of individuals within each generation, a pictorial depiction of a family story, an embroidered copy of a family document or historical photograph, painted coats-of-arms, and plat maps of family farmsteads. As the makers -- Deonna Green and her mother, Ione Todd -- clearly reveal in their oral accounts, the quilt is the result of painstaking research into their family history.

This quilt is the third version of this design. The first one was raffled off at the Old Settlers' Reunion held annually in Mecosta for descendants of the first African-American settlers in Mecosta, Montcalm, and Isabella counties. A cousin won that raffle and now owns the quilt. A second version was made so that the Todd Family History could be shared with other family members; this version was shown in a national exhibition called "Stitching Memories: African-American Story Quilts," organized by the Williams College of Art in 1990. The third version was commissioned by the Michigan State University Museum for their collection and was included in the 1991 exhibition, "African-American Quilt Making Traditions in Michigan."

In the last fifteen years there has been a surge of interest in historical and contemporary African-American quilt making, resulting in numerous exhibitions and publications. In 1983, as part of the Michigan Quilt Project, the staff of the Michigan Traditional Arts Program at the Michigan State University Museum began collecting information on African-American quilt making in the state. This program led to the museum's current exhibit, "African-American Quilt Making Traditions in Michigan," which runs through 29 September 1991. Approximately forty to fifty quilts are being shown with descriptive labels and photographs of the quilters. On these four pages are examples of the beautifully-pieced and skillfully sewn quilts presently [1991] on exhibit at the MSU Museum.

It was a sunny summer afternoon, and we decided to take a Sunday drive around Detroit. I was driving my new 1965 Buick. My cousin Evelyn Norman and I decided to go to Norma Todd's house. But wouldn't you know it, Evelyn did not have her address book or Norma's address.

She said: "I know just about where the house is, but I am not exactly sure." After driving up and down Scovel several times, every house started to look alike. I said, "Evelyn, don't you remember her house or the exact block?" She said, "Marvin, be quiet, keep driving, and let me look." "We will find it."

As it was summer time, peoples' front doors were open. All of a sudden from the silence almost a half of block away came a response in my direction. "W-H-A-T!"

When she found out it was us, she hollered: