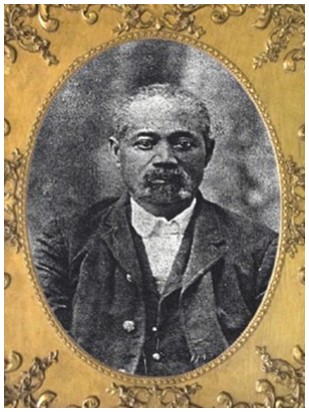 Stephen Todd was born a slave in Garrard County, Kentucky, around the year 1812. Nothing is known of Stephen Todd's parents. They were believed to be a slave woman and a plantation owner. It is also believed that Stephen served as a house boy, although not much is known about his childhood or early manhood.

Stephen Todd escaped slavery and went from Kentucky to Indiana. On September 22, 1864, Stephen enlisted in the service. He was mustered in at Indianapolis, Indiana. Stephen was thirty-eight years old and served in the 8th Regiment, US Colored Infantry as a substitute for Andrew J. Huff of Washington Township, Marion County, Indiana. Stephen enlisted for three years but mustered out May 19, 1865, in Indianapolis, Indiana.

Stephen Todd met Caroline Kahler and both ran away together to Canada. On August 29, 1874, they were united in marriage at Windsor, County of Essex, Providence of Ontario, Canada. The wedding was witnessed by Isaac and William Berry.

Stephen suffered from chronic illnesses, had back and spinal problems and heart disease, and an injury to the left arm. This was according to an application for a pension on September 11, 1890. Correspondence continued for the pension for 10 years, but both died trying. To the best of our knowledge, no pension for war was ever received.

Stephen and Caroline were very poor. They possessed two cows and twenty-four chickens, yielding about $30 a year income. The children had to fend for themselves with no relatives to help because Caroline's parents disowned her. The children did remarkably well with no help available. It made them tough, stern and hard workers to survive. Their children were: Charles 1875; Louis 1876; Mary Jane 1880; William 1882; Sophia 1885; John 1887; Florence 1888; Fredrick 1890; Victoria 1893 and Irene 1897. Charles, Louis, and Mary worked away from home as soon as they were able. William later worked at lumber camps and was the head of the family until Sophia was able to manage. Sophia remained the head of the family until the last five were on their own. The youngest boys--John and Fred could not attend school because they were needed on the farm to ensure food for the summer and winter.

Florence Todd, seventh child, third daughter of Stephen and Caroline Todd, married Arthur Jack Green. They had no children. She died on May 7, 1971. Victoria Todd was the ninth child and fourth daughter of Stephen and Caroline Todd. Victor first married Ira Venable and later married Louis Henderson. She raised Hermitta Davis. Victoria died on April 1, 1967. Hermitta married Sylvester Coleman. They had a daughter, Joanne Dawson. Joanne married Paul Agee, and they had one son, Anthony. They all live in Detroit, Michigan. (Daughter Hermitta is shown on Fred Todd Page). Mary Jane Todd was the third child and first daughter of Stephen and Caroline Todd. She worked on the farm and was married a few times. Her last marriage was to Clarence Richardson. At one time she lived in Chicago. Later she moved back to Remus where she died on November 4, 1946.